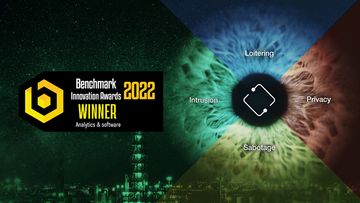 Now that's a reason to celebrate. Despite all the adversities in the world, Securiton Germany can be pleased about no less than three awards this year. The technology brand IPS Intelligent Video Software has once again won the renowned Benchmark Innovation Award.

IPS received this award for its new product IPS NextGen VideoAnalytics in the category "Analytics and Software innovation", leaving competitors such as Genetec and IDIS behind. At this point, many thanks to the readers of the respected trade journal Benchmark Magazine, who voted by a majority for this new IPS analysis and thus recognised its clear advantages: several functions in one module, graphical, easy-to-use interface via drag & drop and several alarm settings at the same time.

IPS has already won the Benchmark Award in recent years, most recently for the IPS Dome Tracker and IPS Critical Infrastructure analytics. This impressively confirms that IPS VideoAnalytics are indispensable for video security due to their performance and precision.

Securiton's drone security colleagues can be no less pleased. Their system took third place in the GIT Award and, for the first time in France, the gold medal in the legendary "Trophées de la Sécurité".